Michael Thonet in 1819 created a small furniture company. In parallel, he experimented assemblies and ways to bend wood ..
Spotted by Prince Clemens Metternich Chancellor of Austria, who became his admirer and protector he went with him to Vienna in 1842, where he interested the emperor to his achievements.
He began working for a furniture cheap, which retain production methods at low cost.
List Clemens used by the main Vienna cabinetmaker (100 workers), it recommended to the English architect of the Prince of Liechenstein, and he was entrusted with the realization of furniture – chair called “flying” and the floor of the Liechtenstein Palace .
In 1851 he decided to create a new business and develops the chair No. 4 that creates order to meet Anna Daum Daum cafe who dreams of “practical chairs, elegant and compact,” it will have the name, and the controls are linked so quickly. Thonet decides to mass produce: it became his first business model and will be successful.
In July 1851, Thonet presents a series of furniture in his last Expo in London, and he received a bronze medal, which contributes to its international reputation. Before the influx of orders, it develops its facilities and bought his first steam engine. Forty employees working in the company when he passes on to his son five, including a chemist in reality it will continue to run until his death. 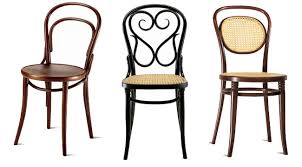 International exhibitions still developing markets, Thonet and increases production. For this, he moves in July 1856 the factory Korischtan in Moravia, a region rich in beech forests of the Black Forest and enables it to employ cheaper labor. The factory has 300 workers and produces 200 per day furniture.
The creation of the chair No. 14 further increasing demand: he opened a second site in the factory where he Bistritz in real series, but maintaining the quality and reduce costs. Production is based on the principles of planning and rationalization, and a form of outsourcing is even implemented with farmers in the region.
Increased production requires more and more raw material and Thonet then buys a whole forest area in Ugrocz Nagy in Hungary, near which he built a third factory specializing in the cutting and bending of wood.
At his death in 1871, his company has six factories in Europe that supply a sales network of 14 retail stores worldwide, including 15 Boulevard Poissonnière in Paris, which became the seat of Thonet Brothers France.