Though the origin of the word Halloween is Christian, the holiday is commonly thought to have pagan roots. Historian Nicholas Rogers, exploring the origins of Halloween, notes that while “some folklorists have detected its origins in Roman feast of Pomona, the goddess of fruits and seeds, or in the festival of the dead called Parentalia, it is more typically linked to the Celtic festival of Samhain”, which comes from the Old Irish for “summer’s end”. 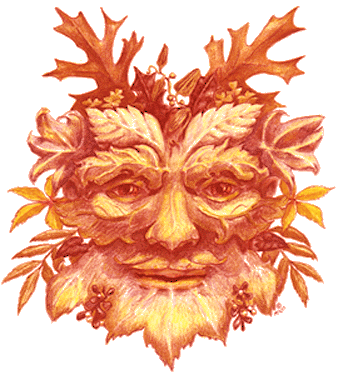 Samhain (pronounced SAH-win or SOW-in) was the first and most important of the four quarter days in the medieval Gaelic (Irish, Scottish and Manx) calendar. It was held on or about October 31 – November 1 and kindred festivals were held at the same time of year in other Celtic lands; for example the Brythonic Calan Gaeaf (in Wales), Kalan Gwav (in Cornwall) and Kalan Goañv (in Brittany). Samhain is mentioned in some of the earliest Irish literature and many important events in Irish mythology happen or begin on Samhain. It marked the end of the harvest season and the beginning of winter or the ‘darker half’ of the year.

This was a time for stock-taking and preparing for the cold winter ahead; cattle were brought back down from the summer pastures and livestock were slaughtered. In much of the Gaelic world, bonfires were lit and there were rituals involving them. Some of these rituals hint that they may once have involved human sacrifice. Divination games or rituals were also done at Samhain.

Samhain (like Beltane) was seen as a time when the ‘door’ to the Otherworld opened enough for the souls of the dead, and other beings such as fairies, to come into our world. The souls of the dead were said to revisit their homes on Samhain. Feasts were had, at which the souls of dead kin were beckoned to attend and a place set at the table for them. Lewis Spence described it as a “feast of the dead” and “festival of the fairies”. However, harmful spirits and fairies were also thought to be active at Samhain. People took steps to allay or ward-off these harmful spirits/fairies, which is thought to have influenced today’s Halloween customs. Before the 20th century, wearing costumes at Samhain was done in parts of Ireland, Mann, the Scottish Highlands and islands, and Wales. Wearing costumes may have originated as a means of disguising oneself from these harmful spirits/fairies, although some suggest that the custom comes from a Christian or Christianized belief (see below). In Ireland, people went about before nightfall collecting for Samhain feasts and sometimes wore costumes while doing so. In the 19th century on Ireland’s southern coast, a man dressed as a white mare would lead youths door-to-door collecting food; by giving them food, the household could expect good fortune from the ‘Muck Olla’. In Moray during the 18th century, boys called at each house in their village asking for fuel for the Samhain bonfire.

The modern custom of trick-or-treating may have come from these practices. Alternatively, it may come from the Christian custom of souling (see below).
Making jack-o’-lanterns at Halloween may also have sprung from Samhain and Celtic beliefs. Turnip lanterns, sometimes with faces carved into them, were made on Samhain in the 19th century in parts of Ireland and the Scottish Highlands. As well as being used to light one’s way while outside on Samhain night, they may also have been used to represent the spirits/fairies and/or to protect oneself and one’s home from them. However, a Christian origin has also been proposed.