In 1994, a century after the death of the painter Gustave Caillebotte was entitled to his first retrospective. The exhibition subtitled “Urban Impressionist” left Paris to Chicago and Los Angeles, and made known to the public a French painter largely ignored so far in Europe and America by presenting more than 100 portraits, interiors, still lifes, landscape – particularly impressive – large urban landscapes.
Gustave Caillebotte (1848-1894) was best known art historians because of the friendship that bound the impressionists which he had also the patron. He helped financially painters who lived in poverty by buying their paintings. We had forgotten that he was a painter himself and even many paintings exhibited with the Impressionists. He never sold his work because he did not need to.
Even after his untimely death, his paintings remained in possession of his family. It was not until the end of the 50′s for the family decided to sell some paintings by Caillebotte.

The painting on this page (rue de Paris), measure 212cm on 276cm, so fairly large size.
This painting represents a crossroads by a Parisian afternoon winter avenues are wide, uniform facades, the view. This is the Paris we know but when Caillebotte painted it it was brand new and modern for the time.
Gustave Caillebotte was born into a prosperous family of the big bourgeoisie, the class could also belong to those shown in this table. His father was enriched by delivering beds to the French army, leaving his wife and son four reports several buildings and a villa. A 26 years after the death of his father, Caillebotte had a considerable fortune.

After studying law, he entered the studio of the academic painter Léon Bonnat, but mythological and historical themes discussed here do not meet and he joined a group of artists such as Auguste Renoir, Edgar Degas, Claude Monet, Camille Pissaro and Alfred Sisley, who wanted to paint nature in daylight and treat topics.
They can not exhibit their work in formal living room, and they formed a “Société Anonyme Cooperative painters sculptors and engravers.” The critical time was indignant. After seeing “Impression Sunrise” by Monet, was called the young painters of impressionism, after the famous words of a journalist: “I thought too, since I’m impressed, there should be the impression in there … “

Their first exhibition of 1874, which was not involved Caillebotte, scandal. He presented several paintings in the second exhibition of 1876, and in 1877, the third, he exhibited including “Paris Street, Rainy Time”. The critic Georges River is a researcher notes that bold on which hopes up based. Three years later the novelist Joris-Karl Huysmanns said: “This one is a great painter, a painter whose paintings take some later their place alongside the best.”
Time would give reason to Huysmanns but Caillebotte, ‘was nevertheless seen for nearly a century as manager and philanthropist, who rented rooms to Impressionists, brought executives, was advertising and financed.
In 1878, he gave 750 francs to Pissaro, he paid the rent and move Monet and bought 18 works, he admired his painter friends who had denied the tradition – perhaps he too dreamed to detach from the middle-class which it was derived.
His younger brother died in 1876 and Gustave Caillebotte thought the time had come for him to make a will. It is entered in the history of art as it procured the Impressionists late but official recognition of artworks to the French State on the condition that exposes it appropriately, “or in a attic, i in a museum of province “, and only if the public accepted this painting. According Caillebotte, it could take “20 years or longer.”
He was not mistaken: it was not until 1897, three years after his death and after violent discussions, the French government decided to accept the bequest. For the first time, 40 Impressionist paintings were presented in a national institute, the Luxembourg museum in Paris.
The donor was so modest that he did not want to impose his works to the French state next to the painters he admired, so Renoir decided to add to this exhibition one Caillebotte painting “les raboteurs de parquet”. 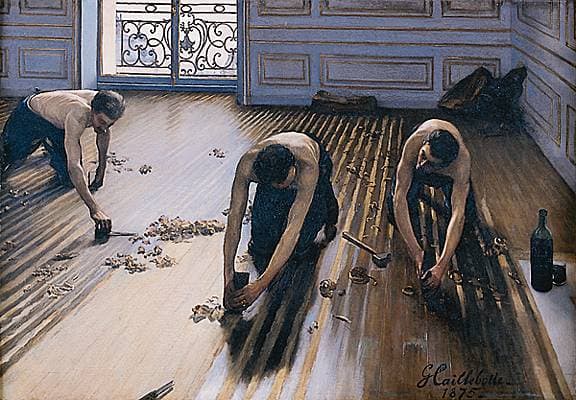 The table title mentions “a Paris street,” but we see more and we can easily identify: opens before us the rue de Turin, left Moscow street running down the center and at the bottom, the Calpeyron street. The crossing will call today instead of Dublin and close to the Gare St Lazare.
These rows of street had been created during the Youth Caillebotte, within the limits of the old city on a hill where was born a residential area populated by wealthy bourgeois.
The city center was not far redesigned too, with the Opera House and the wide boulevards lined with cafes and upscale luxurious department stores.

All this was the work of Baron Haussmann, prefect of the Seine from 1853 to 1869. Napoleon III was responsible for destroyed the medieval center with its narrow streets and constructions wet after two outbreaks of cholera had caused thousands of deaths. No government dared to tackle this problem so far, but the Emperor was in favor of progress, it would improve the living conditions of the population and Hausmann gave the order to “take the old Paris” his “army” of officials. Baron was not satisfied with the old Paris, he also conquered new territory west of the city and turned into a residential area.

(purple line: work performed under Haussmann during the Second Empire)

Credit played a key role in the financing of this work, the authoritarian prefect gave “carte blanche” for all construction projects, whether public or private administration haussmann sole jurisdiction: from 1850, reform law authorizes to conduct massive expropriations – on behalf of the public unit, even without due process. Were demolished, they built, there was speculation, land prices climbed. “The wheels of expropriation” worked, as well as Emile Zola says, “as a powerful machine that, for fifteen years, has upset Paris, blowing fortune and ruin …”
Caillebotte’s father is enriched at that time: in 1866, he bought “the city of Paris, represented by Baron Haussmann”, a field he paid 148,780 francs, with the obligation to build. When he died a millionaire, his fortune was mainly composed of tenements in the new districts and distinguished.
Private individuals built, but under the influence of authorities and according to uniform building regulations. Thus was born what we see on the Caillebotte painting: wide straight roads connecting one place to another or building particularly important – station or Opera, Bourse – to another and offering a spectacular view . Haussmann appreciated the clear perspective and symmetry, he liked to see the streets to join the star-places, as well as Caillebotte painted.
The houses were not desired, but reports monumental buildings sheltering luxury apartment showing virtually identical facades carved stone. The widening of the Rue Reaumur. Parallel to the Grands Boulevards, the artery is today one of the major roads of Paris between the Opera and the Rue du Temple. Before being extended under the reign of baron, she crossed one of the darkest places of the capital, the famous Court of Miracles (left). (Charles Marville / Publishing Patron and Gilles Leimdorfer for Le Figaro Magazine).

Each district had its gutter height data, it was most often houses six floors with balcony railings on the second and fifth floor, which should extend the entire length of the facade. Today, many places have their thread and aesthetic uniformity and harmony Baron Haussmann. He reorganized the urban landscape according to his tastes and those of bourgeois inhabitants of the capital, and Caillebotte painted that was modern at the time.
Caillebotte’s family, it is said that the painter had prepared preliminary drawings to his paintings, sitting in a bus – at the time these cars were still public horse-drawn – especially glass, so sheltered from the cold and rain.
But because “even in nature must dial” like so well Degas, Caillebotte chooses its viewing angle so that a table was born almost geometrical construction. A gas burner in cast iron lying by shadows on the wet pavement, stands at the center of the painting.
Standard accessory, manufactured industrially, the lamp rythmed streets Haussmann. Caillebotte also used to structure his painting, divide the vertical plane.
On the horizontal plane is organized by the street which crosses the stage and a virtual line that connects almost all the heads of the characters. At right, the man with the umbrella cut in two by the edge of the painting (rue de Paris, temps de pluie), gives the impression that we are faced with a new scene taken from life, framing, chosen at random, and not designed to paint all the details .

At the exhibition of 1877, Caillebotte also showed off “Paris Street rainy weather the” large canvas “Pont de l’Europe”. It shows bourgeois and workers walk on a wide bridge over the rails of the Gare St Lazare by a warm and clear spring morning or summer.
On this occasion, the other impressionists as expounded variants views of the capital, paying tribute to the city of loafers, idlers and people dancing merrily in cabarets.
This does not really fit artistic tastes. During the War of 1870, France had been occupied by the Germans, then the revolutionary commune took power, set fire to buildings and was severely repressed during the “bloody week”. In 1877, the reparations were paid to Germany, the economy flourished and the Republican government was preparing to celebrate the reconstruction with the Universal Exhibition of 1878. In a series of articles, Renoir asked artists to lend their support to democratization and to help give color to the city. Caillebotte painting of a third, presented the exhibition of 1877, shows that building painters paint in color gray facades of the street. In “Paris street” recognizes one of them with its scaffolding in the background.
Nevertheless, the painting does not show the Paris joyful, sociable, who wants to forget the bad memories, on the contrary: most of the characters portrayed seem lonely, they do not wander the empty streets, they hurry: their umbrellas don’t protect them only from the rain that falls but apparently there also other bystanders. In addition to contemplating the pavement dominate almost a quarter of the surface of the canvas, many spectators would think would think unwittingly about the Commune of 1871, paving stones thrown up barricades.

The rioters had fought for days on “place de Clichy”, near the intersection represented by Caillebotte, Victor Hugo did not he wrote that the pavement is the symbol of the people?