Constantin Brancusi was born in Romania in 1876, in a small village at the foot of the Carpathian Oltenia, in a rural and archaic.

Constantin Brancusi
Head of a Boy, Bronze of 1906

Very young he left his native village, and in 1894, entered the School of Arts and Crafts in Craiova where he admitted the following year in the sculpture studio then in wood carving. In 1898, he entered the Ecole des Beaux-Arts in Bucharest. In 1904, he crossed a part of Europe join Munich, where he stopped some time at the Art Academy before arriving in Paris on July 1914.

Upon his arrival in Paris, he studied at the Ecole des Beaux-Arts in the studio of a sculptor recognized academic Antonin Mercie. In 1906-1907, a graduate of Fine Arts, he exhibited at the Salon d’Automne. Auguste Rodin, president of the jury, noticed his work and asked him to become director developed in his studio. At that time Rodin enjoys international recognition and nearly fifty assistants working for him.

A month in Rodin’s studio is enough to estimate that “nothing grows in the shade of large trees.” Following a difficult period to define its own commitment to artist: “It was the hardest years, the years of research, the years when I had to find my own way.”

Brancusi comes from an archaic world and an ancient tradition of wood carving. For the sculptor, “it is the texture of the material that controls the theme and form both of which must leave the matter to him and not be imposed from outside.”
Brancusi does not appear as a designer but as an intercessor able to reveal within the material he uses “the cosmic essence of matter.” In the choice of its prior block of stone or wood, Brancusi receives advance in the specificity of the material, the presence of the sculpture. These forms smooth, ovoid polisses sculpture purifies us back to the statues of the Greek Cyclades in space …

After discovering the major themes of his work between 1909 and 1925, (The Kiss, The Bird, The Endless Column, The Roosters …), Brancusi that will take tirelessly, often with slight variations.
Within modernity being formed, the avant-garde have little influence on his work. He is more interested in wood carvings by Gauguin, he sees in the retrospective devoted to the artist in 1906 at the Salon d’Automne in Paris.
In reality, it really does not meet model and in Western sculpture, as do many artists of his time, he is interested in other cultures, those of Asia and Africa, present in the collections of the Guimet Museum, the Louvre Museum or the Museum of Ethnography of the Trocadéro.

References to an archaic art he can extract his work contingencies own styles in his time and register his sculptures in a more universal dimension. At the same time, when Brancusi said: “It is not the external form which is real, but the essence of things. Based on this truth, it is impossible for anyone to express something real by imitating the surface of things, “it is deeply rooted in a thought structure that the art of the twentieth century, from Kandinsky, Mondrian and Malevich up ‘Yves Klein, Richard Serra and the minimalist artists American sixties. Potentially infinite seriality Columns Brancusi and the importance given to the perception of the space in which his works are part define much of contemporary sculpture from the fifties. 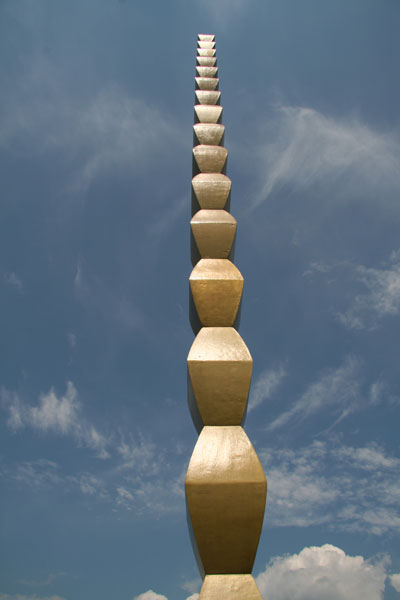 Brancusi is also a close friend of Marcel Duchamp, Erik Satie, Fernand Léger, Man Ray, Tristan Tzara. In 1912, he visited with Duchamp and the Light Fair in Paris Aerial Locomotion. A majestic airplane propeller, Duchamp asked if an artist today can do a work as beautiful and pure as the propeller. At that time, Brancusi began the cycle of Birds theme that develop to obtain a pure upward momentum. This story also shows how his sculpture, which refers to the ancient sources and timeless, may enter into correspondence with modernity. The beauty of objects produced by industry passionate generation of artists of the early 20th century.

Precursor of abstract art, Brancusi is keen to reduce forms to their simplest expression, favoring the ovoid. In addition, it uses raw materials, not reworked, like ‘The Kiss’ and ‘The Spirit of the Buddha’. In 1926, his sculptures are blocked at the U.S. border due to a misunderstanding that customs did not understand that it was art. A historic trial opens, because the debate is about the definition of art, beauty and the legitimacy of abstraction. Brancusi is recognized today as one of the greatest sculptors of the twentieth century. The whole ‘Tirgu-Jiu, Romania erected, but especially’ The Bird in Space ‘are considered essential references of contemporary art. His Paris studio is restored to the Centre Georges Pompidou.