The special scholar discussed for a long time the more or less big age of the origins of “Saint Sulpice” church.

A gravestone of the Xth century, found in 1724 in the searches of the new church, proved that from time the most moved the back there was in this place a cemetery dependent on a chapel. We build a new church of the XIIth there in the XIVth century; It was enlarged by a nave under “François Ier”, and by three chapels in 1614. Nevertheless the increasing increase of the population of the village Saint Germain in the South of “Saint-Germain des Prés” created at his most illustrious inhabitant’s the thought to meet to raise a monumental church on the location of the former, which, moreover, threatened ruin.

The proposal was solved in an assembly, held on March 16th, 1643 under the presidency of the prince of Cop. Queen Anne of Austria put on February 20th, 1646 the first stone of the new church. The works, begun by Christophe Gamard, continued by Louis Le Vau, by Daniel Gittard, interrupted for lack of money from 1678 till 1718, resumed then under the direction of Oppenord, were ended with Jean Servandoni, thanks to the zeal of the priest Languet of Gergi and to the advantage of a lottery granted by Louis XV in 1721.

The big portal, finished in 1749, is the work of Servandoni; it consists of two superimposed porticoes, the ground floor, of Doric order, and the superior, Ionic order, drilled by seven arches up to date and surmounted by two towers of seventy meters, higher consequently of four meters than towers Notre- Dame.
The effect obtained by means so simple is impressive and majestic.

Each of both towers consists of a square detached house, accompanied with Corinthian columns and with a front wall, triangular in that of the North, half-arched in the tower of noon(south), which remains unfinished and waits ut crowning for one and a half century.

Over the square detached house, raises itself the circular tower. The tower of the North contains bells; his big height had indicated it to receive an air telegraph of the system Chappe, the black arms of which stirred over the street of the Blind persons until the installation of the electric telegraphy in Paris in 1852.
The architect Chalgrin had finished or rather reconstructed the tower of the North in 1777; the Revolution did not allow him to return the same work to the Southern tower. From there, something strange and of out-of-place in the respective situation of these twin and dissimilar sisters whom Victor Hugo compared, by a comparison more pleasant than exact, in two stony clarinets. The inside of the building is of impressive dimensions; his length, since the first step of the main facade until the extremity of the chapel of the Virgin, which juts out in cor belled construction on the street Garancière, is 56 meters; his height, of 32 meters, since the pavement up to the vault.

It is less high and wider thus at the same time, any kept proportions, than
“Saint-Germain des Prés”, subtlety which exaggerates the feeling of vastitude, if we dare to express himself so. The width of “Saint-Germain des Prés” is only of a third approximately compared with the length and with the height, whereas the width of “Saint-Sulpice” represents tenth four of its length and hundredth only twenty three of its height. The chorus, completely built on Pierre Gittard’s drawings, is surrounded with seven arches posts of which are decorated with Corinthian pilasters; this prescription is also the one of the nave and the arm of the cross. All the pillars of “Saint-Sulpice” are dressed in marble at the level of support. Behind the high altar, the chapel of the Virgin, attributed to Servandoni, and finished in 1777, eleven years after its death, by the architect Wailly, is of a magnificence which does not exclude either the grace or the unction. Vanloo painted panels, the brother Slodtz modelled the golden and bronze, marble ornaments; behind the altar, a narrow opening, drilled at the bottom of the terminal niche, lets filter a ray of mysterious light on a statue of the white marble Virgin, the masterpiece of Pajou. 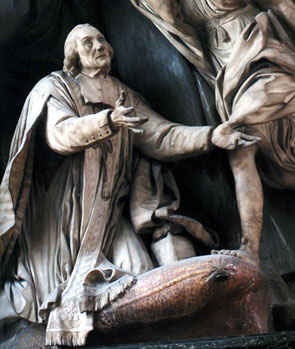 The chapel grazes itself of a dome where Lemoine painted in fresco the Assumption, of a strong color which calls back Hercule’s ceiling, paints by the same artist to the palace of Versailles.